Nalchik – is the capital of Kabardino-Balkaria in Southern Russia.
Located in the central part of the country, on both banks of the river of the same name Nalchik. ​​Site of the city

The city is situated in the foothill zone of the republic.
“Nalchik” in translation from indigenous languages ​​and means “horseshoe”, that is a symbol of happiness, prosperity and good luck.
Horseshoe became the emblem of the city. Weather in Nalchik 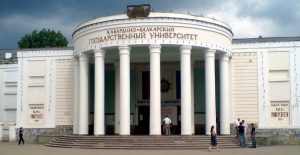 The plenary sessions and parallel sessions of the conference will be held in the auditoriums of Kabardino-Balkarian State University according to the schedule.

Baksan Neutrino Observatory (BNO) is situated in the North Caucasus in the area of the Baksan river at a height of 1700 m above the sea level.
The underground setups are located under the mount Andyrchy (3922 m) at different distances from the entrance of the adit which is 4000 m in length.
The Observatory is a shared research center for various experiments in the field of fundamental and applied physics.